This week, Yvonne Chartrand is in the studio with company dancers Eloi Homier and Julia Carr. Yvonne is joined by Davida Monk, of Calgary's Dancers' Studio West and M-Body, who is there to facilitate the research phase of a new creation. This is the first phase toward a new contemporary dance piece, tentatively titled Eagle Dancer.

What do Davida Monk and Yvonne Chartrand have in common?

YC: We both have a love of asking questions, especially during the choreographic process. And my favorite question is: "Davida, what do I do now?"

DM: First you have to ask what you saw and what interested you. You need to practice developing a way of mining your own responses that are in fact the source of your aesthetic preferences. For example, can you name three things that you would like to dig into?

YC: Do you mean responding quickly, trusting in your own vision and your own voice?

DM: Exactly, don't second-guess yourself. Try to get to the point as directly as possible. Take a risk to commit to what you think it should be.

Read on for more information about the creative process (written by Davida Monk)...

Yvonne identified starting places from her inspiration for movement explorations. The first idea, Yvonne called 'the dream.' We worked to identify the themes in detailed movement terms. How does the base idea of  "the dream" move?  At what speed, in what space, concentrating on what body parts or co-ordination of body parts, what kind of tension and flow, with what focus and what sequence of action. How does the central image evolve within this base idea?  We defined these things through the dancers' trials, taking five minutes for each trial to deepen the investigation. We worked to hone our own responses by listening very carefully to how the movement was affecting us as viewers. Yvonne made choices to direct the movement towards certain qualities and away from others, eliminating distracting or extraneous movement and drawing out essential qualities. We then asked new questions of the base idea to see what expression arose if the dancers alternated essential strategies for co-ordination while dancing in each others' line of vision and kinespheres but with distinct directional facings. Something new and unexpected came from this. Yvonne investigated the spatial consequences again in a version of the base idea in which Eloi revolved on the spot while Julia travelled toward him. Again we posed more questions. What would happen if the dancers performed the base idea in an accelerating sequence, or if they abandoned the sequence but danced essential aspects of the base idea rapidly? Yvonne improved the clarity, without losing the energy of this rapid version, by assigning a specific use to the dancers' arms. We noted the suggestions that arose from all these ideas as places to return for deeper investigations. 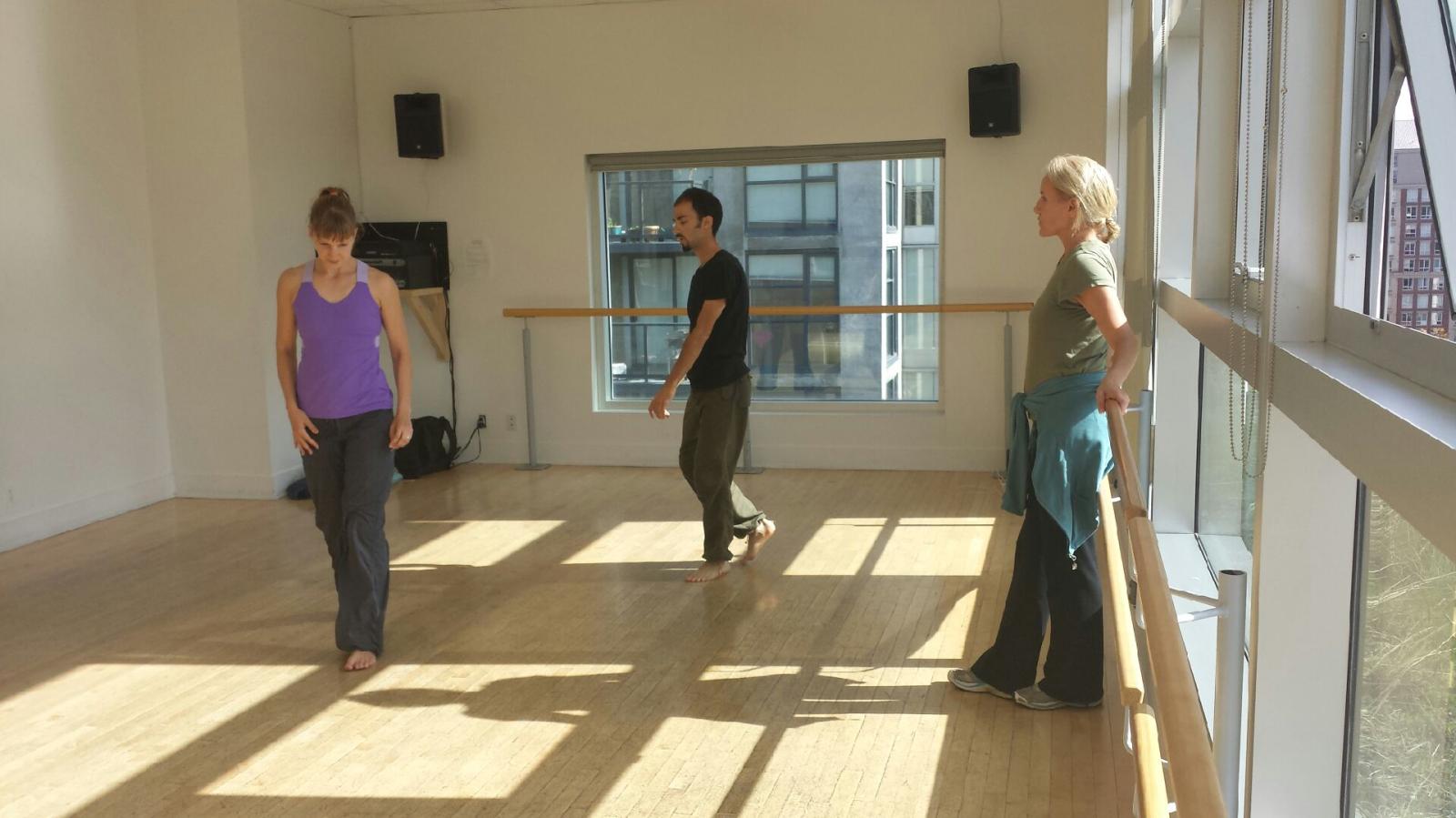 The second idea Yvonne called 'letting go.' The starting image of this base idea was Julia picking up and carrying Eloi from where he lay in a fetal position on the floor. After several different attempts by each of us this proved too difficult to do. The solution we then tried was to ask Eloi to establish the same base fetal position standing, replicating as much as possible the sensation and form of lying on the floor. Julia was then able to partially drag and partially swing Eloi while travelling through out the space. The dancers improvised a series of leanings, lifts and carryings. We considered how this base sequence was composed of travelling phrases and holding moments noting that the duration of each of these could be treated to create a momentum toward a significant target image: Eloi lying in the original fetal position on the floor, with Julia, having just 'let go' of him, upstage of him in the standing fetal position. We discovered that what had been abandoned as a starting point of the exploration reemerged in its reverse form as a conclusion to the sequence of leanings and carryings. We noted too that the 'letting go' became as much a part of Eloi's intention as it was part of Julia's. We learned that there were two kinds of letting go. We noted a formal circularity in that the standing fetal position was evident at the beginning in Eloi and at the end in Julia.  It seemed that we had touched somehow on the inevitability of death.