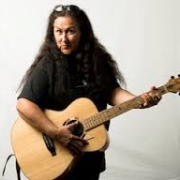 SANDY SCOFIELD - It’s a long way from playing Cajun party music to a capella vocal arrangements of First Nations songs to composing music for theatre and for our own Winter Olympics Opening Ceremonies in Vancouver. Sandy Scofield has invested a tremendous spirit, navigating and negotiating through a life dedicated to music, sometimes on her own, and sometimes with collaborators. She studied full-time at Vancouver Community College taking their two-year jazz music program. Most recently, she completed her degree at the esteemed Simon Fraser University School for Contemporary Arts, studying composition under the likes of Owen Underhill and electroacoustic music with Barry Truax.

Sandy Scofield is a multi-award winning composer, musician and singer. She has studied classical, jazz, African, Indonesian gamelan and electro-acoustic music. A Métis from the Saulteaux and Cree Nations, she hails from four generations of fiddlers, singers and musicians. Among her four recordings to date, she has won five Canadian Aboriginal Music Awards, a Canadian Folk Music Award, an Indian Summer Music Award (U.S.A.), a Western Canadian Music Award and received three consecutive Juno nominations. Over the years, she has mentored innumerable First Nations singers and songwriters in the way of rudimentary music theory, vocal techniques, songwriting craft and music-industry protocol. She has toured to festivals on four continents, and in 2011, performed at the International Rainforest World Music Festival in Borneo making this the fifth continent where she has performed.  She has composed for dance, film, television and theatre, with the Aboriginal Welcoming Song for the 2010 Olympic Opening Ceremonies, the highlight to date.